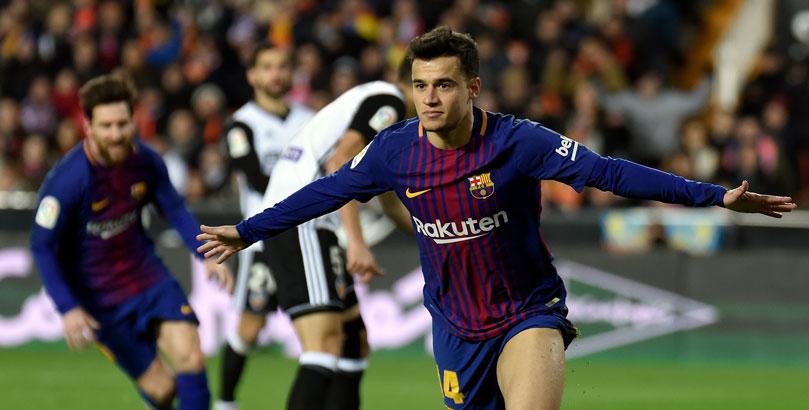 Ole Gunnar Solskjaer has a huge rebuilding job on his hands and we’ve picked out five Man Utd transfer targets who could help turn things around at Old Trafford.

Ander Herrera and Antonio Valencia have already been confirmed as summer departures and could be joined by many others, so who can revive the club’s flagging fortunes?

Antoine Griezmann looks set to join Barcelona after confirming he will leave Atletico Madrid, so that should signal the end of Coutinho’s stint at Camp Nou.

The 26-year-old Brazil star has failed to sparkle with the Catalan giants but did remind everyone of his talents with a terrific strike against United in the Champions League.

Coutinho showed his creative flair can be a lethal weapon in the Premier League when with Liverpool and would be a great fit for United, who have struggled to break down teams which defend deep at Old Trafford.

The Croatia international could be another player surplus to requirements at Camp Nou, as younger prospects push their claims to be given more game time.

At 31, Rakitic would not comply with United’s preferred option of bringing in rising stars with the potential to develop further.

However, with Juan Mata possibly following Herrera out of the exit door and Nemanja Matic looking past his best, bringing in an experienced head to control proceedings in midfield would be a wise short-term move.

United have been linked with any number of central defenders again this summer, notably Ajax captain Matthijs de Ligt and Napoli’s Kalidou Koulibaly.

However, Maguire is still seen as the safest bet to bring stability to a flaky back four and looks the perfect foil for Victor Lindelof in that department.

Luring him away from Leicester won’t be easy, but Riyad Mahrez’s move to Manchester City last summer showed that the Foxes will always find it hard to hold onto their most prized possessions.

United are in desperate need of wing-backs to give them more athleticism and energy at both ends of the field and Wan-Bissaka fits the profile perfectly.

The 21-year-old was named Crystal Palace’s player of the season after impressing throughout the campaign and has featured for England at Under-21 level.

The Red Devils have struggled to replace Valencia at right-back, with Matteo Darmian not making enough progress and Diogo Dalot still raw, but the 6ft Wan-Bissaka would instantly bring pace, power and professionalism to that position.

Having caught the eye at youth level for Watford and Manchester City, Sancho took the bold move to relocate to Germany with Borussia Dortmund and has not looked back since.

He has led the way in the Bundesliga this term when it comes to assists and also reached double figures when it comes to scoring himself, ideal stats to warrant a place in our Man Utd transfer targets.

Those figures suggest he can be more productive than the flashy but erratic Jesse Lingard and United fans have always loved flying wingers, so the 19-year-old would be assured of a warm welcome.